The Potential for Nanomedicine to Clean up our Bodies

A new study by the Environmental Working Group reveals that:

“Major food companies like General Mills continue to sell popular children’s breakfast cereals and other foods contaminated with troubling levels of glyphosate, the cancer-causing ingredient in the herbicide Roundup. The weedkiller, produced by Bayer-Monsanto, was detected in all 21 oat-based cereal and snack products sampled in a new round of testing commissioned by the Environmental Working Group. All but four products contained levels of glyphosate higher than what EWG scientists consider protective for children’s health with a sufficient margin of safety.”

These findings further confirm the notion that the contamination of our environment is becoming increasingly internalized within each one of us. 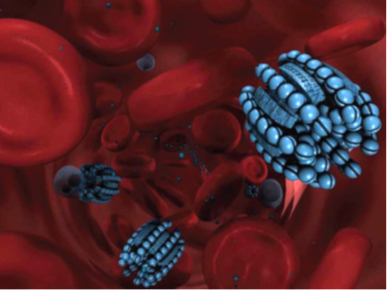 It may be possible through the emergence of advanced nanomedicine that, within the next decade or two, we may have at our disposal what are referred to as “Sentinels”. These autonomous nanomedical devices would patrol our bodies 24/7 to serve as a robust protective augmentation for our immune systems. A chapter entitled “The “Sentinel”: A Conceptual Nanomedical Strategy for the Enhancement of the Human Immune System” has been generated by NA Founder, Frank Boehm, and co-author Dr. Angelika Domschke for the recent book, Immune Aspects of Biopharmaceuticals and Nanomedicines, edited by Dr. Raj Bawa et al.

As relates to the increasing concentrations of toxic elements that can be concentrated in our bodies over time, through the ingestion of food, drink, and indeed via the ambient environment, as well as our exposure to myriad pathogenic microorganisms, (natural or nefariously synthesized) an excerpt from this chapter envisages how these sentinels might be to our benefit…

It might be possible that these sentinels, which would be exceptionally “trained”, would continually scan for, identify, and rapidly eradicate virtually any invading bacterial or viral pathogen, organic and inorganic toxin, or other unidentified “non-self’ entity in the human body.

As the result of this nanomedical capacity, individuals would rarely become ill and might be endowed with considerably extended longevity. Hence, beneficial sentinel capacities might serve as an important facet of a far more extensive worldwide vision for nanomedicine. When combined with nanotechnology (molecular manufacturing) and artificial intelligence (imbued within quantum computers), nanomedicine may give rise to a condition that the authors refer to as “Global Health Care Equivalency” (GHCE), where every individual on the planet would have equivalent access to advanced, efficacious, and cost effective nanomedical diagnostics and therapeutics no matter where they happen to reside, or under what conditions they live.

The excess fluoroquinolones (FQs) discharged into the aquatic environment due to human activities must be removed cost-effectively. In an article published in the Journal of Cleaner Production, the authors fabricated an environment-friendly dealkaline lignin-grafted Fe3O4 nanoparticles [...]

Light-controlled reactions at the nanoscale

Controlling strong electromagnetic fields on nanoparticles is the key to triggering targeted molecular reactions on their surfaces. Such control over strong fields is achieved via laser light. Although laser-induced formation and breaking of molecular [...]

A paper recently published in the journal Nature Communications demonstrated an effective method to realize on-chip nanophotonic topological rainbow devices using the concept of synthetic dimensions.​​​​​​​ Importance of Synthetic Dimensions for the Construction of Topological Nanophotonics [...]

Scientists are studying whether long COVID could be linked to viral fragments found in the body months after initial infection. In the chaos of the first months of the coronavirus pandemic, oncologist and geneticist [...]

Experts perplexed over number of people getting long COVID

Public health experts are divided over how many people are getting long COVID-19, a potentially debilitating condition that comes after a patient has recovered from the coronavirus. Ill effects from the condition can include [...]

Four strange COVID symptoms you might not have heard about

Well over two years into the pandemic, hundreds of thousands of COVID cases continue to be recorded around the world every day. With the rise of new variants, the symptoms of COVID have also evolved. Initially, [...]

A new method for exploring the nano-world

Drug resistance is a common phenomenon, with drugs becoming less and less effective as their usage increases. To address this issue, a novel technique employing conjugated polymer-based nanoparticles is presented in the study published [...]

Microrobots have the potential to revolutionize medicine. Researchers at the Max Planck ETH Centre for Learning Systems have now developed an imaging technique that for the first time recognises cell-sized microrobots individually and at [...]

Scientists have recently developed multifunctional hexagonal NaxWO3 nanocrystals that can serve as microwave sensitizers to kill cancer cells as well as improve the overall chemodynamic therapy (CDT). This study is available as a pre-proof in Chemical Engineering Journal. [...]

Apple’s visionary founder, the late Steve Jobs once said, “the biggest innovations of the 21st century will be at the intersection of biology and technology”. And that prediction is coming true in the drug [...]

Chemical separation processes are essential in the manufacturing of many products from gasoline to whiskey. Such processes are energetically costly, accounting for approximately 10–15 percent of global energy consumption. In particular, the use of [...]

Omicron relatives called BA.4 and BA.5 are behind a fresh wave of COVID-19 in South Africa, and could be signs of a more predictable future for SARS-CoV-2. Here we go again. Nearly six months [...]