Spacesuits that are augmented by embedded nanotechnological elements will enable an intimate and dynamic interface between indwelling astronauts, with advanced nanomedical diagnostic and therapeutic capabilities, as well as an almost instantaneous capacity for emergency medical response. When donned by astronauts these (conceptual) AI driven, lightweight, flexible, and highly resilient “Interskin” (IS) class spacesuits (Figure 1) would automatically self-activate and proceed to resize for a snug fit to their physical contours, via negative pressure, The IS would then commence to conduct a full body scan and diagnostic examination to quickly generate a personalized on board medical profile. These data would be combined with data from a “medic tab” key (akin to an electronic dog tag) that the astronaut would insert into a IS resident port to upload his/her complete medical physiological and psychological parameters and medical history. 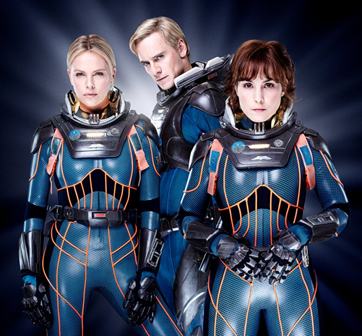 Figure 1: Perhaps similar in design to the example above, the Interskin (IS) would comprise a sleek AI driven nanomedically enabled interface between the occupant and spacesuit. (Image credit: Ian Derry)

Subsequently, the IS would transition to a semi-engaged status of medical readiness and prompt the astronaut to don his or her “Envisor” helmet, which would proceed to complete full engagement and power up, AI integration, sealing, and safety checklist protocols. The Envisor would serve as a highly advanced multifunctional nanotechnology-endowed system on its own, to facilitate an immediate and seamless connection between the astronaut and all configurable features of the IS spacesuit. A high resolution 3D brain scan would then be conducted by the Envisor, which would complete the initial in situ health status check. At this juncture, the resident astronaut and IS would effectively operate as a “single fully integrated synergistic entity.”  “The vital signs of the occupant, down to the most subtle physiological and biochemical functions, would be constantly monitored. Any deviation from the occupant’s optimal (reference) physiological profile (predetermined and programmed into the IS) would be rapidly assessed by AI and compensated for if required, via an onboard “molecular pharmacy” that is stocked with a full complement of nanomedical devices, (Figures 2, 3) with the ability to quickly address almost any conceivable physiological aberration or injury.” (Boehm) 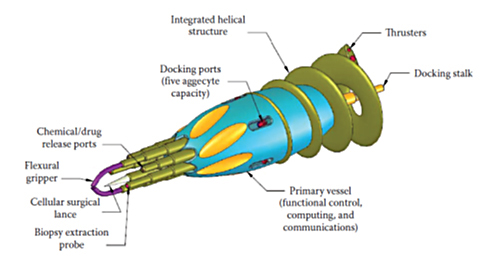 The IS would be designed to be completely comfortable for astronauts for long periods, if necessary (e.g., several months), to accommodate and sustain them. Hence, it might facilitate extended “off ship/base” terrestrial exploratory/scientific investigative expeditions. The IS would also be self-powered by employing various energy harvesting strategies (e.g., via bipedal footfall and movement piezoactive generators, temperature differentials) for the continuous recharging of embedded arrays of high capacity and lightweight laminated thin film batteries. “Interskin-generated power might be accomplished by lining the entire suit with a durable thin film layer that is comprised of aligned arrays of billions of piezoelectric nanowires or nanotubes (Figure 4)  (e.g., zinc oxide, barium titanate, cadmium selenide)” (Boehm) 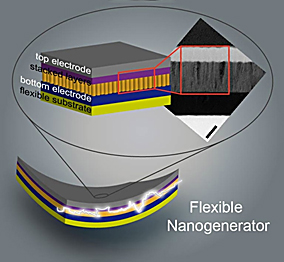 Figure 4: Illustration of a section of flexible zinc oxide (ZnO) piezo-nanogenerator that might line and generate electrical power for the Interskin spacesuit by virtue of the slightest movements by the occupant. (Image credit: Giwan Yoon/Korea Advanced Institute of Science and Technology)

Additional sources of power might encompass the generation of electricity through the exploitation of potentially significant temperature differentials (Seebeck effect) that exist between the temperature of the interior surfaces of the IS, in contrast to that of the frigid temperatures of ambient space (-454.72°F/-270.45°C) or alternating freezing/scalding planetary surface temperatures on the Moon (night -243° F/-153° C//day 253° F/123°C) and Mars

(-225°F/-153°C at the poles). Further, the entire outer surface of the IS might be comprised of high-performance ultrathin film photovoltaic collectors. Electrical energy derived from cosmic ionizing radiation might also be harvested through the use of unique combinations of conductive nanomaterials.

In essence, the IS would comprise a very powerful wearable computer that is intimately merged with the occupant. “In an envisaged cross section, proceeding from the inside out, the layers and associated functions of the IS might encompass (a) diagnostic and physiological parameter monitoring nanosensors, nanotherapeutic interface, moisture wicking, and waste transport system (collection and recycling); (b) power harvesting/generation and insulation (e.g., aerogel) (c) integrated AI (with high redundancy) and extensively distributed nanoelectronic infrastructure; (d) woven, highly durable artificial muscle/exoskeleton infrastructure encased within an ultrastrong, yet pliable shell. It would also have superhydrophobic properties that would act to vigorously repel any liquid and prevent regolith particulates from sticking to the exterior surfaces. It will likely be the case that each of these primary layers would be further subdivided into finer dedicated strata.” (Boehm)