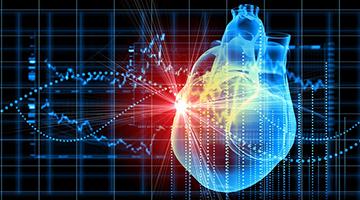 In 2004, NASA released its Bioastronautics Critical Path Roadmap (BCPR), with an aim to “establish tolerance limits to the space environment and develop countermeasures to overcome these problems.” The BCPR listed close to 50 space-related medical risk factors, which included those associated with the potential for serious cardiac dysrhythmias (from unknown causes) that may lead to hypotension (low blood pressure) and syncope (fainting). Further, significant cardiac rhythm issues (e.g., ventricular tachycardia – rapid heartbeat), linked with altered cardiac electrical activity and stability were reported for a number of cases during a MIR mission.

Degraded cardiac and vascular functionality, as well as decreased cardiac mass can result from both short and long duration spaceflight. This may subsequently worsen any pre-existing cardiovascular disease, such as arterial atherosclerosis, and lead to potentially irreversible heart rhythm disturbances, myocardial infarction, or stroke. Incidences of cardiac dysrhythmias in some astronauts might be due to a reduction in aerobic capacity. Additional cardiovascular issues, as reported by Blaber et al., encompass reduced heart rate and diastolic pressure, headward fluid distribution, and decreased plasma volume.

The volumes of blood and plasma (Figure 1) are subject to significant changes during spaceflight, where investigations have revealed that plasma volumes may be reduced by from 10% to 17%. This was surmised to be the culmination of decreased fluid intake/urinary output and lowered red blood cell mass, combined with fluid reallocation from “intravascular to interstitial space due to reduced compression of tissue by gravitational forces”.  Furthermore, when the human body is isolated from gravity in spaceflight, facial edema occurs, as well as thinning of the legs (chicken legs), due to the headward flow of fluid. 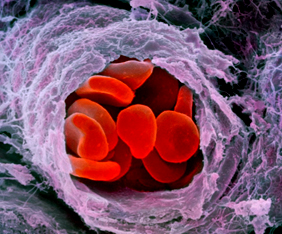 In terms of the degradative effects on muscle tissue (Figure 2) in the space environment, skeletal muscle atrophying and rapid cell mass loss accompany extended spaceflight. This results in decreased endurance and strength via regulation deficiencies in sensory-motor and muscle force capacities. These insufficiencies leave one susceptible to soreness and damage at the interfaces of muscles and connective tissues (e.g., muscle fiber/tendon/bone), which can lead to further degradation. It was reported by Fitts et al. that under microgravity, the muscle mass of rats decreased by 37% over the course of a week.

In human studies, it was revealed that both slow type I and fast type II muscle fibers were equally vulnerable to atrophy under microgravity. The researchers reported that: “the maximal voluntary contraction of the human plantar flexor muscles declined by 20% – 48% following six months in space, while a 21% decline in the peak force of the soleus type I fibers was observed after a 17-day shuttle flight.” This was attributed to muscle atrophy combined with the “selective loss of contractile protein”, reduced expression of mRNA muscle genes, decreased microRNA/protein translation, lower neural drive to the muscles, and negative systemic alteration due to hormone modification and metabolic changes. Interestingly, it was discovered by Allen et al. that muscle atrophy was exacerbated upon return to Earth and 1 g gravity. 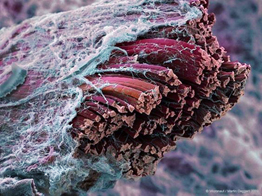 A potential nanomedical strategy for the delivery of siRNAs to cardiomyocytes (Figure 3) with greater than 95% efficiency was demonstrated by Ladeira et al. who utilized carboxyl functionalized Single Walled Carbon Nanotubes (SWNTs) (50-500 nm long) as nanocarriers. The beating frequency of the cardiomyocytes, as well as their inherent integrity, was not compromised by the internal introduction of the nanotubes at doses of 0.05 mg mL−1. This nanomedical strategy may enable the delivery cardiac therapeutics to ensure that heart muscle cells maintain optimized physiological integrity under microgravity. 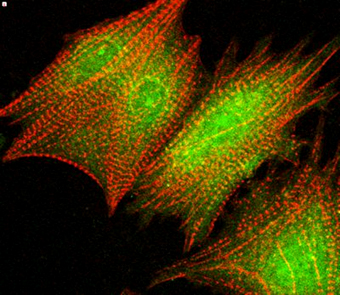 A multiwalled carbon nanotube (MWNT) scaffold (Figure 4) (162.75 ± 11.4 nm thick) was employed by Martinelli et al. to demonstrate the promotion of growth, maturation, and initiation of spontaneous electrical activity in cultured neonatal rat ventricular cardiac myocytes. It was surmised that this was the case due to the scaffold’s similarities to natural extracellular matrix. “One can envisage that such carbon nanotube based scaffolds might be employed to grow heart muscle cells as part of an advanced tissue engineering capability onboard future spacecraft for the potential replacement of degraded heart muscles of astronauts, due to prolonged exposure to microgravity.” (F. Boehm) 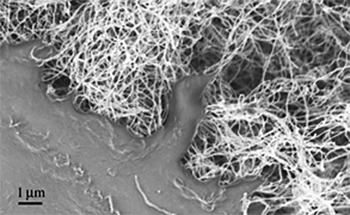 Several growth factors have been shown to significantly impact muscle gene expression, motility, differentiation, and satellite cell proliferation. In the microgravity environment nanocarriers might be configured to deliver muscle mass growth stimulators, such as insulin-like growth factor 1 (IGF-1) , peptide/protein hormones, fibroblast growth factor (FGF), cytokine transforming growth factor-beta (TGF-β) , and clenbuterol . Further, Bowman-Birk inhibitor concentrate (BBIC) has demonstrated the capacity to counteract muscle atrophy. “Appropriately designed nanocarriers may enable the precise targeting and protracted delivery, as well as optimal distribution of such entities, which may be translatable and reconfigured such that they may function synergistically with nanomedical devices to sustain muscle mass.” (F. Boehm)

Gold nanoparticles (AuNPs) possess extremely high surface areas and exhibit a strong affinity for thiol groups; hence, they have the capacity to efficiently bind with intracellular substances. When they are “decorated” with targeting agents they can ingress into cells via endocytosis to precisely deliver nucleic acids, bioactive compounds, and therapeutic drugs. It was reported by Zielinska et al. that myogenesis was enhanced following the delivery of heparan sulfate (HS) (Figure 5) to the extracellular matrix via AuNPs. When a HS/AuNP complex (50 mg/L, 500 μL) dose was introduced into chicken embryos, the population of breast muscle nuclei was observed to be significantly higher than that of controls, with an increase in “myocytes and nuclei, and enlarged area of muscle fibers”. 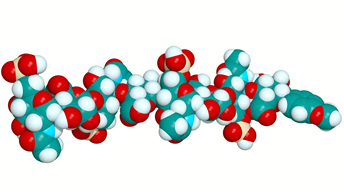