The impact of different kinds of commercial metallic nanoparticles (nanosized zero valent iron (nZVI), bimetal nZVI-Pd, and nano-magnetite (nFe3O4)) for the recovery of soil co-contaminated with Cr and PCBs are evaluated in a recent article published in the journal Scientific Reports.

The implementation of restoration solutions for soil degraded with a combination of pollutants (metal(loid)s and chemical products) has rarely been studied. The results suggest that the introduction of nZVI or nZVI-Pd, as well as pseudo-anaerobic settings, may well be employed to restore Cr and PCB-contaminated soil.

Soil Contamination Due to Chromium

Soil contamination is a global problem. It degrades the ecological functions supplied by the soil, reduces agricultural production, and has a negative influence on human health.

The bulk of contaminants come from man-made sources such as commercial activities, quarrying, public transit, and sewer waste treatment on soil.

The primary pollutants detected in European soils are metals and metalloids. As environmental pollutants, they are non-biodegradable and hence linger for long durations.

Due to its highly anti-corrosive characteristics, chromium (Cr) is extensively employed in a variety of industrial applications. Metallurgical operations, tanneries, wood processing, galvanizing, and petrochemical industries are just a few examples.

Cr (III), which presents as impermeable oxide and hydroxide cations, and Cr (VI), which emerges as oxyanion, are by far the most frequent types of Cr found as soil minerals.

Cr (III) is rejected by the electrostatic repulsion of soil and so stays in soil solution, accessible to crops and other creatures. As a result of its high mobility and bioavailability, Cr (VI) is 1000 times more hazardous than Cr (III).

Persistent organic pollutants (POPs), like metallic materials, are biological chemical compounds that are permanent, extremely poisonous, and micropollutants, posing a concern to the ecosystem.

PCBs are a class of synthetic organic chemicals classified as POPs by the Stockholm Convention of 2001 owing to their high public health hazard and breakdown resilience. PCBs may be created inadvertently as by-products in a variety of biochemical procedures that use chlorine and hydrocarbons.

PCBs have been linked to spillage from power equipment, waste distribution to soil, garbage furnace fumes, leaks during transportation, evaporation and sedimentation from surface waterways, and leakage from improper treatment and disposal.

Use of Nanoparticles for Soil Remediation

The increased particular surface area of nanoparticles leads to faster reaction kinetics with contaminants. Many distinct nanomaterials, such as carbon nanotubes, inorganic materials, and activated carbons, have been explored for cleanup purposes, but nano zero valent iron (nZVI) particulates are the most extensively deployed.

The core–shell structure of zero valent magnetite nanoparticles is critical for interacting with various contaminants.

The application of magnetized nanomaterials, such as nano magnetite (nFe3O4), for the rehabilitation of metal(loid) contaminated streams has gained popularity in recent decades. This is because of their higher absorption capabilities and magnetic characteristics, which allow for better membrane separation from the solid material.

The major goal of this research was to compare the efficacy of three kinds of commercial magnetite nanoparticles (nZVI, nZVI-Pd, and nFe3O4) for the restoration of industrialized soil polluted with Cr and PCBs. 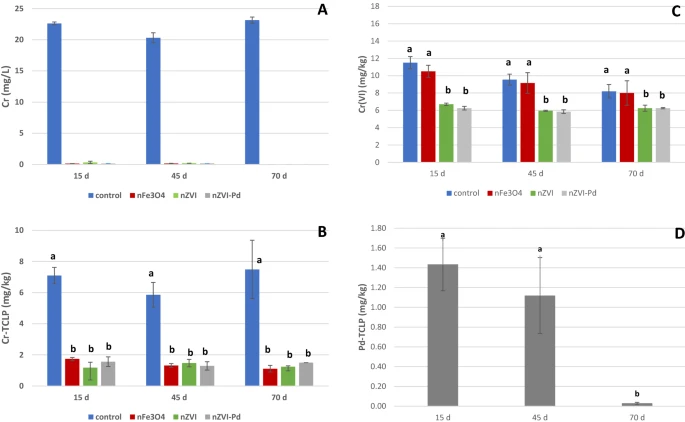 When nZVI, nZVI-Pd, or nFe3O4 were added to soil polluted with Cr and PCBs, the leakage of Cr in the soil was greatly decreased, and the immobilization remained stable over a period of 70 days under the simulated conditions.

When contrasted to nFe3O4, Te nZVI and nZVI-Pd were more successful in converting Cr (VI) to Cr (III). The PCB levels in soils sprayed with the three kinds of iron nanoparticles fell considerably after 15 days of engagement between soil and nanoparticles.

Control soils demonstrated a drop in PCBs content during the 45-day sample period due to environmental remediation, reaching levels comparable to those seen in soil amended with nZVI and nZVI-Pd. In this case, biodegradation might be possible if the soil was just poisoned with PCBs, but not if it also included metals like Cr.

The findings show that the introduction of nZVI or nZVI-Pd, as well as pseudo-anaerobic settings, might be employed to recover Cr and PCB-contaminated soils.