Scientists have recently applied cellulose nanofibers to mitigate the fire damage in historic papers. This study has been recently published in Nano-Micro Small.

A major part of our culture has been documented in the form of scripts, books, musical scores, drawings, and paintings, which need to be conserved.

The future generations must be given a chance to be inspired by past scripture and learn from the historic data. Hence, it is imperative to preserve historical documents properly.

Historical papers are often damaged by fire and these are far more complex to restore, compared to damages caused by aging or usual wear and tear.

In 2004, a catastrophic fire in the historic library of Duchess Anna Amalia in Weimar, Germany, destroyed a large invaluable collection of hand-written musical literature between the 17th and 19th centuries.

This incident emphasized the importance of developing scientific means to determine the extent of damage caused and preserving the documents as much as possible.

Additionally, the newly developed method must be suitable for high-throughput as thousands of sheets are required to be treated.

How to Conserve and Restore Damaged Papers?

Papers are not only damaged due to direct exposure to the flames but also damaged due to indirect heat effects and the impact of water and other extinguishing agents.

Therefore, papers that are not burnt but indirectly damaged, undergo drastic changes in appearance and physiochemical properties due to a series of chemical processes, such as dehydration, oxidation, hydrolysis, gasification, and cross-linking.

Although the legibility of the manuscripts is greatly deteriorated by charring, it could be partially improved by lamination, digitalization, and multispectral imaging.

The papers retrieved from the Anna Amalia library after the fire have been restored by two methods, namely, the leaf casting of the papers and lamination of the damaged and stabilized paper.

However, historians have pointed out that these methods have reduced the readability of the treated papers.

Papers are also restored using an adhesive mixture of different cellulose ethers, such as carboxymethyl, hydroxypropyl, methyl hydroxyethyl. This method has a lesser impact on optical properties. 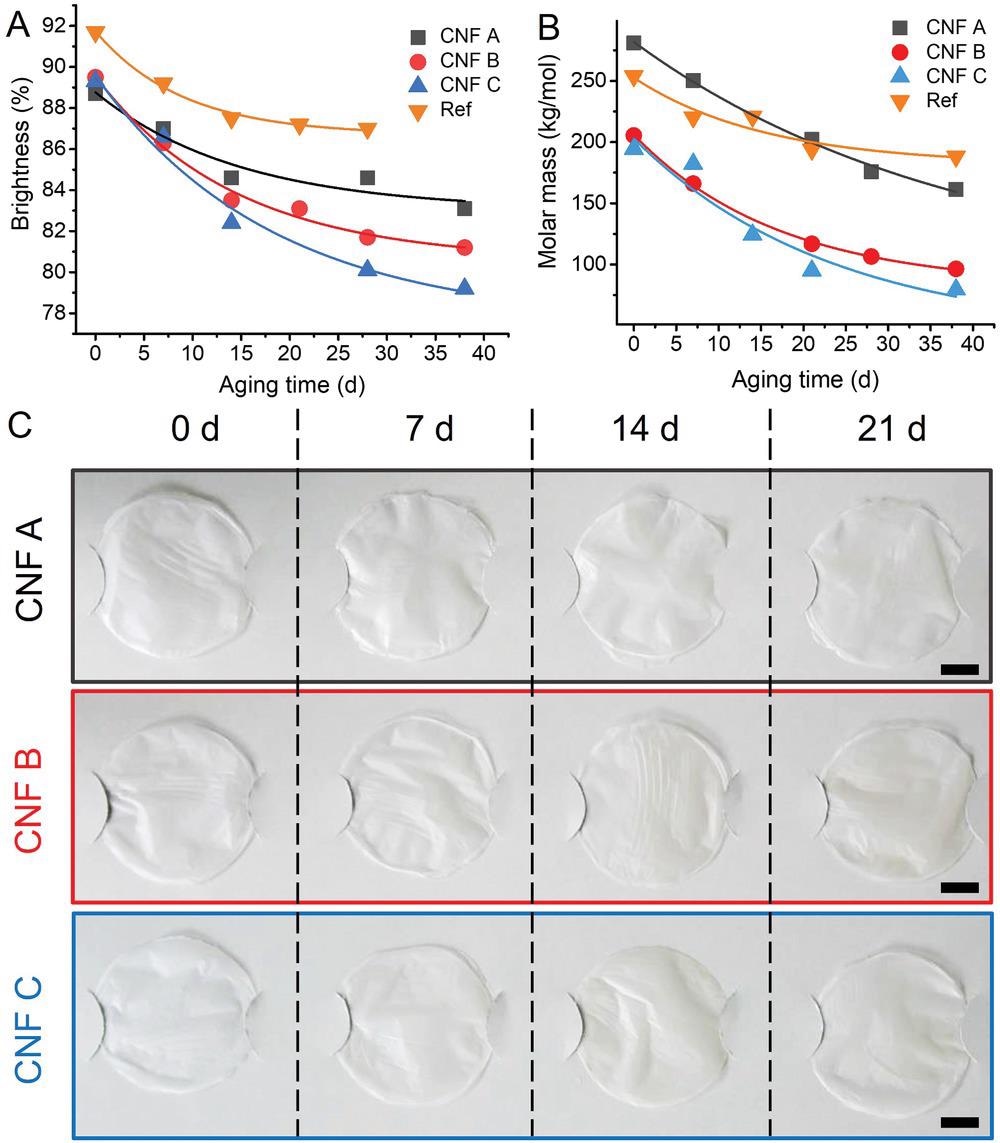 Scientists have performed an in-depth analysis of fire-damaged papers, bearing different degrees of fire damages, to understand their chemical and surface properties.

They categorized the chemical and structural changes into L-, M-, and H-heat damage.

Research revealed a progressively increased carbon content in the papers by analyzing the presence of C-C bonds and decrease in C-O bonds. This finding implies the formation of hydrophobic carbon-rich layers on the fire-damaged papers.

The charred papers exhibit structural changes at nano-micro scale, with increased porosity and water sorption. In the less charred areas, the cellulose was found to be affected by both chain cleavage and cross-linking.

The authors used these data to develop a new stabilization method for severely fire-damaged manuscripts and prints. This method is based on the coating of suspensions of aqueous cellulose nanofibers (CNFs) on the damaged papers.

They predominantly selected CNFs owing to their chemical compatibility and low visual effect on surfaces. This stabilization method can restore historical manuscripts for a longer period.

In this study, CNF acts as a reinforcing agent and is applied as a 0.5–1 wt.% aqueous suspension.

Absorption and retention of CNFs occur due to the porosity and the remaining polar groups of the charred material, chemical and structural similarities between less damaged areas of the paper, and CNFs the extraordinary network and film-forming properties of CNFs.

The authors revealed that this method improved the mechanical stabilization of paper without affecting visibility and legibility.

At present, scientists are testing this method to rescue and preserve selected specimens from the ducal collection of musical literature from the remains of Anna Amalia Library.

The newly developed stabilization method involves the coating of the damaged papers with a thin layer of CNFs.

The main advantage of this method is that it enables the preservation of papers as well as retrieval of the contained historical information.

The latter function has been possible because CNF develops a flexible, transparent film on the surface and adheres strongly to the damaged matrix which significantly reduces the fragility of the paper.

Hence, this technique provides stability and facilitates digitization and further handling. In the future, the possibility of applying CNFs by spraying must be studied.