A group of researchers recently published a paper in the MDPI journal pharmaceutics that demonstrated the effectiveness of using lipid-biopolymer nanobeads as indomethacin (INDO) carriers to reduce drug toxicity.

INDO, an orally administered non-steroidal anti-inflammatory (NSAID) agent, is used extensively for inflammation, fever, and pain control. However, the oral administration of INDO often leads to severe side effects, specifically in the gastrointestinal system, such as abdominal ache, indigestion, and diarrhea owing to the first-pass metabolism. Thus, new approaches are being investigated to lessen the INDO systemic toxicity and improve its overall efficacy. 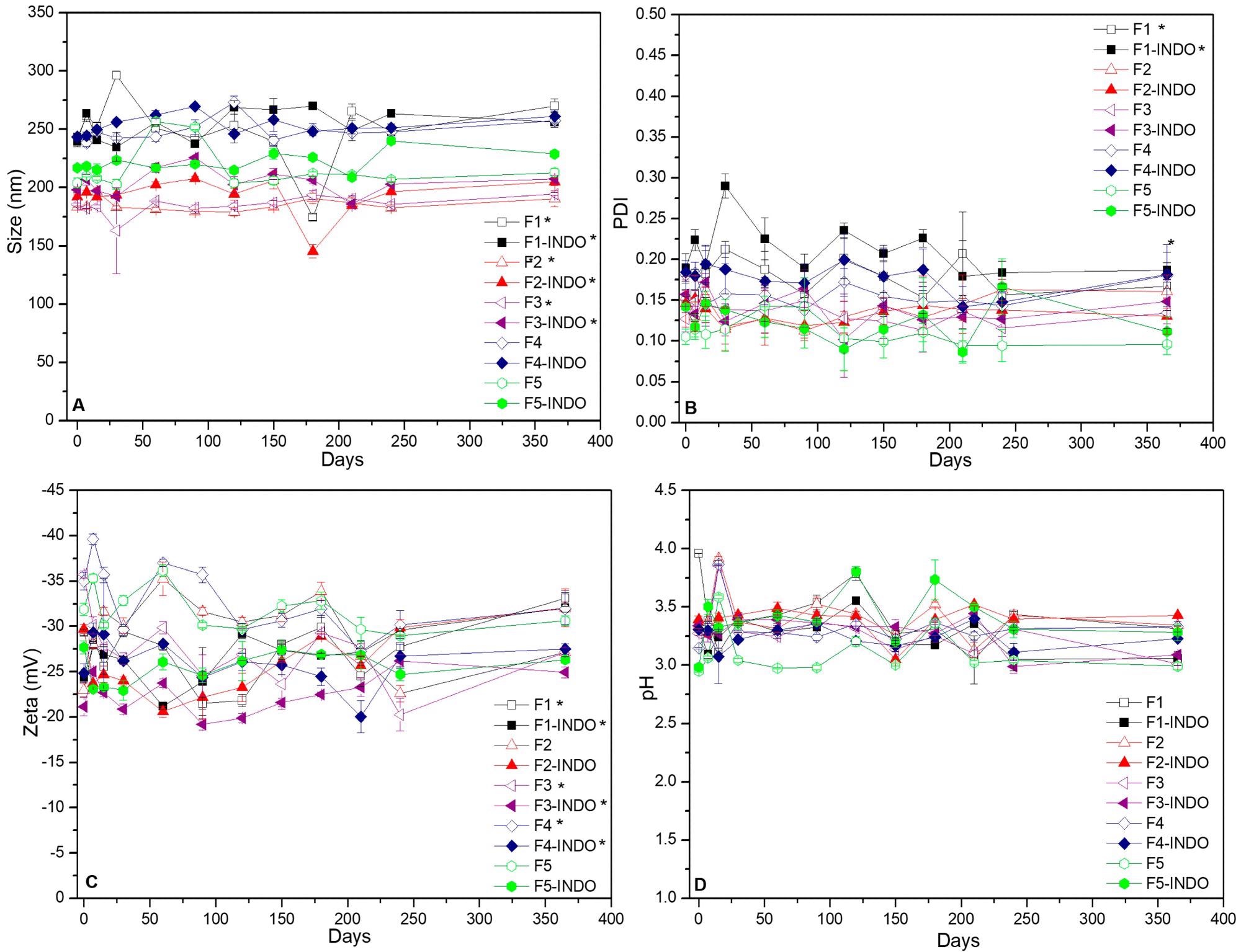 Colloidal drug delivery systems (DDS) with improved therapeutic actions can reduce the side effects by releasing the loaded drugs in a sustained manner. For instance, nanostructured lipid carriers (NLC) can be used to load and deliver various anti-inflammatory compounds through several drug administration routes. However, NLC as a colloid cannot provide the mucoadhesion and gastro-resistance required for oral administration of INDO.

Lipid–polymer nanohybrid formulations that contain at least a single nanostructured material in their composition can potentially merge the benefits of every excipient/carrier within a single DDS. Biopolymers are widely utilized as DDS as they are biodegradable, biocompatible, and versatile in nature. For instance, chitosan, a cationic polysaccharide, possesses exceptional mucoadhesive properties, which can be suitable for INDO administration.

However, chitosan displays sensitivity to acid media such as the gastric microenvironment. This issue can be resolved using xanthan gum (XAN), an anionic exopolysaccharide, as the coating agent of the lipid-polymer nanohybrid formulations such as nanobeads.

In this study, researchers combined two distinct strategies of coating and hybridization to decrease the INDO systemic toxicity and extend its release profile by simulating an oral administration. Initially, lipid–biopolymer nanobeads were synthesized in which NLC blended with chitosan solution encapsulated the INDO, and the nanobeads were coated by XAN. Later, they investigated the efficacy of the synthesized nanobeads and the reduction in INDO toxicity due to them. 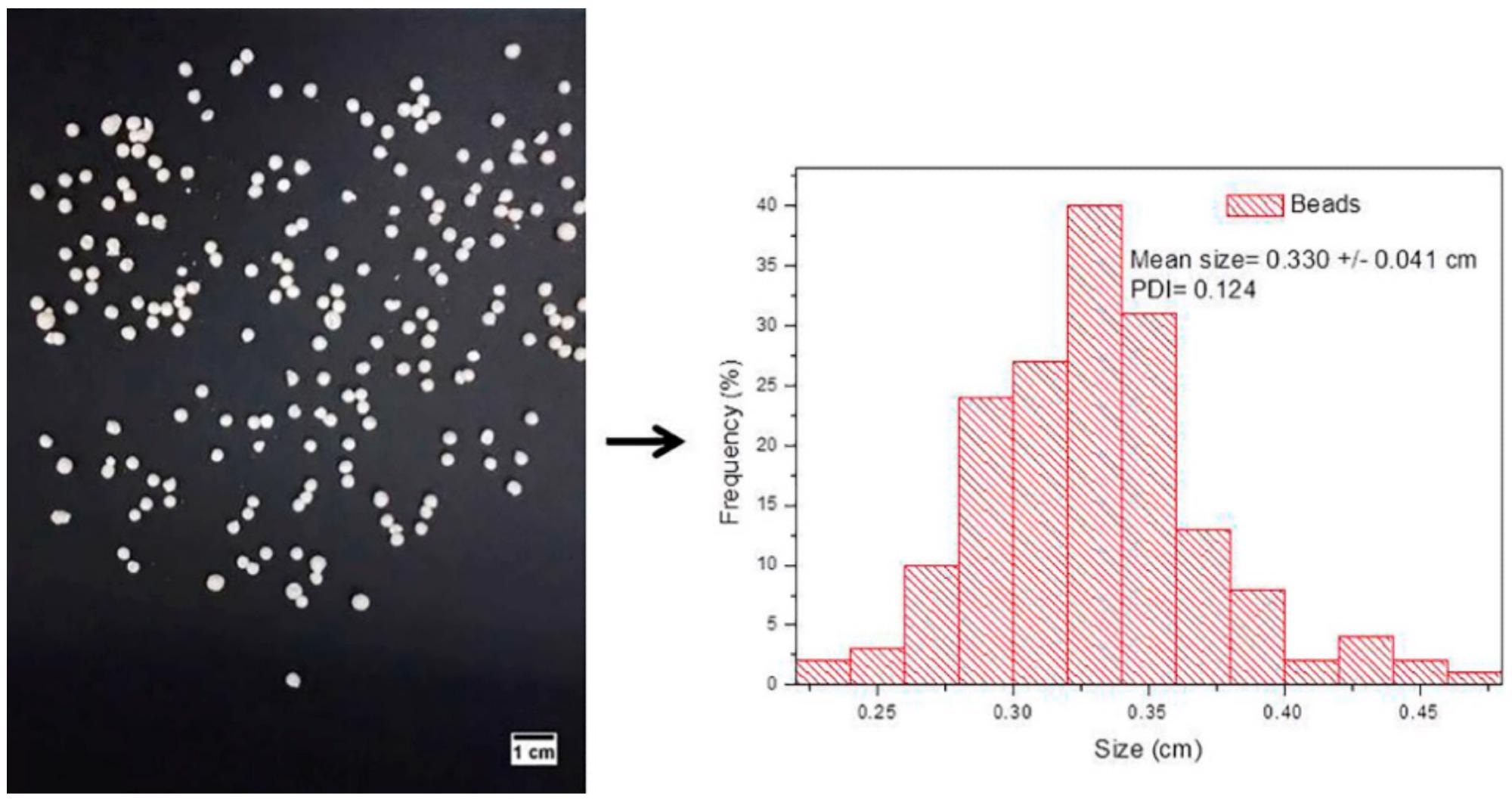 2%, w/v NLC/INDO and NLC as control formulation were synthesized by the ultrasonication emulsification method, where MM acted as a solid lipid, poloxamer as a surfactant, and CO as a liquid lipid. Under magnetic stirring, the lipid phase containing CO and MM was briefly heated without or with 2% INDO at 10oC above the solid lipid melting point.

The aqueous phase containing 2-5% P68 was also heated at a similar temperature and then added to the lipid phase under high-speed homogenization for 3 min at 10,000 rpm in an Ultra-Turrax blender. Eventually, the obtained microemulsion was tip-sonicated at 20 kHz and 500 W in 30 s (on/off) cycles for 20 min, and then cooled in an ice bath to 25oC.

The polydispersity index (PDI) and particle size of the synthesized NLC/INDO and NLC formulations were determined using the dynamic light scattering (DLS) method, while the Zetasizer Nano ZS90 equipment was employed to measure their zeta potential values by electrophoretic light scattering. Researchers also determined the long-term physicochemical stability and in vitro cell viability of the samples and the INDO encapsulation efficiency.

Chitosan was scattered in 50 mL of 0.1% acetic acid, and XAN was dissolved in 50 mL DI water under magnetic stirring. Subsequently, 2% hydroalcoholic INDO solution was mixed with the chitosan solution and stirred at room temperature for 2 h to obtain chitosan/INDO beads.

In the preparation of chitosan/NLC-INDO hybrid nanobeads, half of the acetic acid solution was replaced with NLC loaded with 2% INDO for chitosan solubilization. The final XAN-coated forms were synthesized by initially immersing the aliquots of chitosan/NLC-INDO nanobeads and chitosan/INDO beads into 0.5% w/v XAN aqueous solution, then filtering and cooling them to −20oC, and finally freeze-drying.

Researchers performed the water uptake test and the INDO release test in in vitro mode, and in vivo toxicity assays through the chicken embryo model on the samples.

Ten distinct NLC formulations without and with INDO were successfully synthesized that showed a pale white color and a homogenous aspect. The physicochemical properties of NLC formulations remained suitable for use even after one year of storage, which indicated their long-term stability, and their INDO encapsulation efficiency was 99%.

The hybrid nanobeads of XAN-coated chitosan and NLC/INDO displayed exceptional thermodynamic, structural, and in vitro swelling properties, which indicated excellent compatibility between the biomaterials, and an extended drug release profile up to 26 hours. 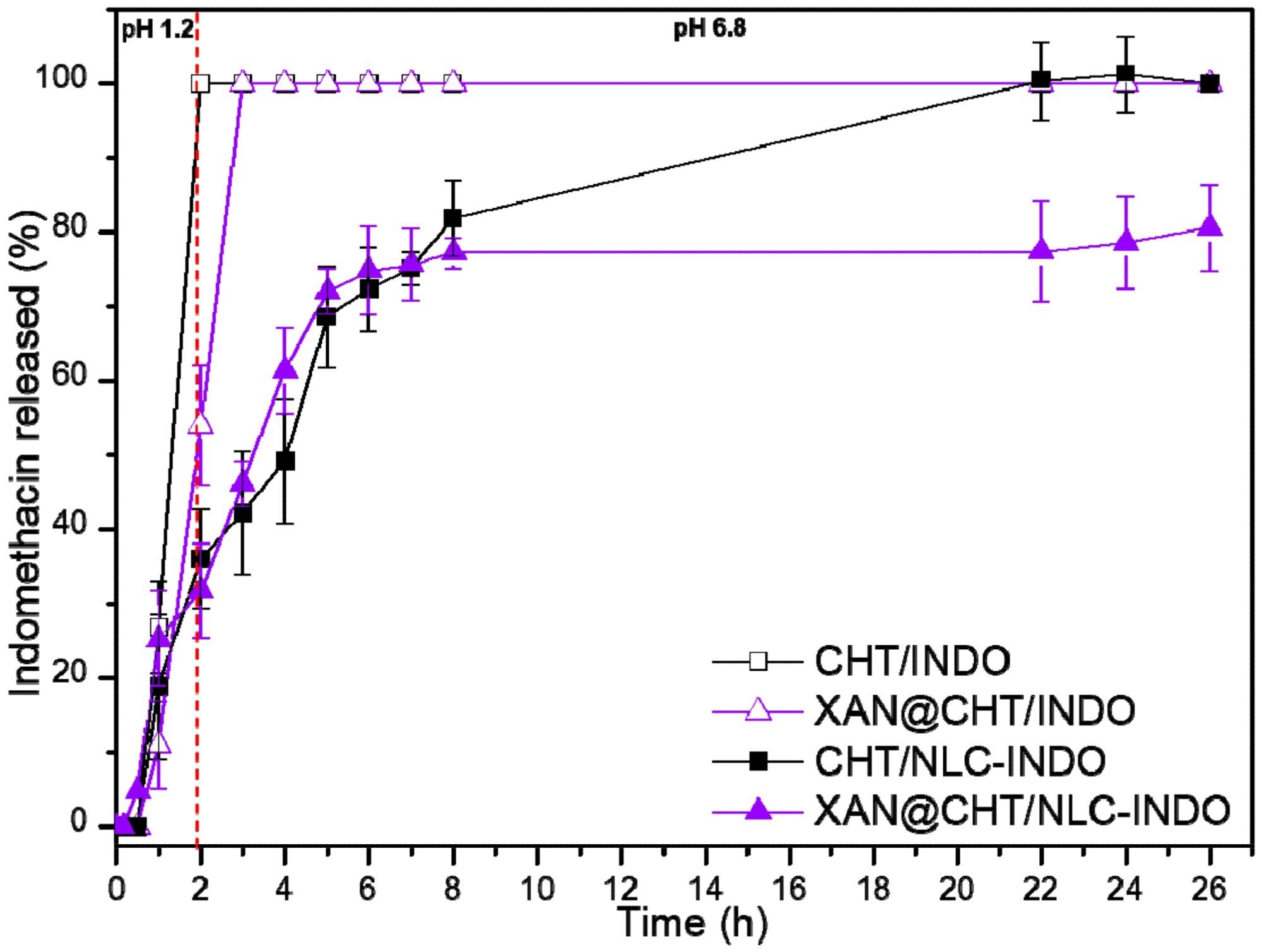 The synergism observed between the biopolymer and nanolipid excipients helped in preventing the burst release effect within the first two hours of experiments, which simulated a gastric medium, followed by an extended-release in the pH 6.8, simulating an intestinal medium.

The XAN coating on nanobeads acted as a gastro-resistant excipient that protected chitosan and NLC/INDO from an unexpected swelling and prevented drug release in the initial hours of experiments.

Taken together, the findings of this study demonstrated that the lipid–biopolymer nanobead can be effectively used for delivering INDO, and other anti-inflammatories, through oral administration.