A study conducted at the New York City Department of Health and Mental Hygiene, USA, and the Mailman School of Public Health, Columbia University, USA, has determined the transmission rate, immune escape ability, and infection fatality rate of the B.1.526 variant of severe acute respiratory syndrome coronavirus 2 (SARS-CoV-2).

The findings reveal that the variant has considerably higher transmissibility and immune escape potential than previously circulating variants and that it can increase the infection fatality rate by 62% – 82% among older adults. The study is currently available on the medRxiv* preprint server.

With the progression of the coronavirus disease 2019 (COVID-19) pandemic, several new variants of SARS-CoV-2 have been identified. Because of increased infectivity and pathogenicity, some of these variants have been designated as Variants of Concern (VOC) or Variants of Interest (VOI) by the World Health Organization (WHO).

The B.1.526 variant of SARS-CoV-2, also known as the lota variant, was first identified in New York City in November 2020. Later, the variant has been detected in all 52 states in the United States, as well as in 27 countries across the world.

As observed in a laboratory-based study, this variant is modestly resistant to neutralization by therapeutic monoclonal antibodies and vaccine/infection-induced antibodies. In contrast, evidence indicates that the variant does not increase the risk of breakthrough infections in vaccinated or previously infected individuals.

In the current study, the scientists have analyzed multiple epidemiological and population datasets collected in New York City and performed mathematical modeling to determine the transmission rate, immune evasion ability, and infection fatality risk of the B.1.526 variant.

The scientists utilized a network model-inference system to estimate the transmission dynamics of SARS-CoV-2 and population-level variables and parameters in New York City. Based on collected information, they conducted a city-level multi-variant, age-structured modeling analysis to estimate the infection and immune evasion ability changes for the B.1.526 variant. The final analysis utilized the data obtained from two models to estimate the variant-specific mortality rate among individuals infected with SARS-CoV-2 (infection fatality risk). 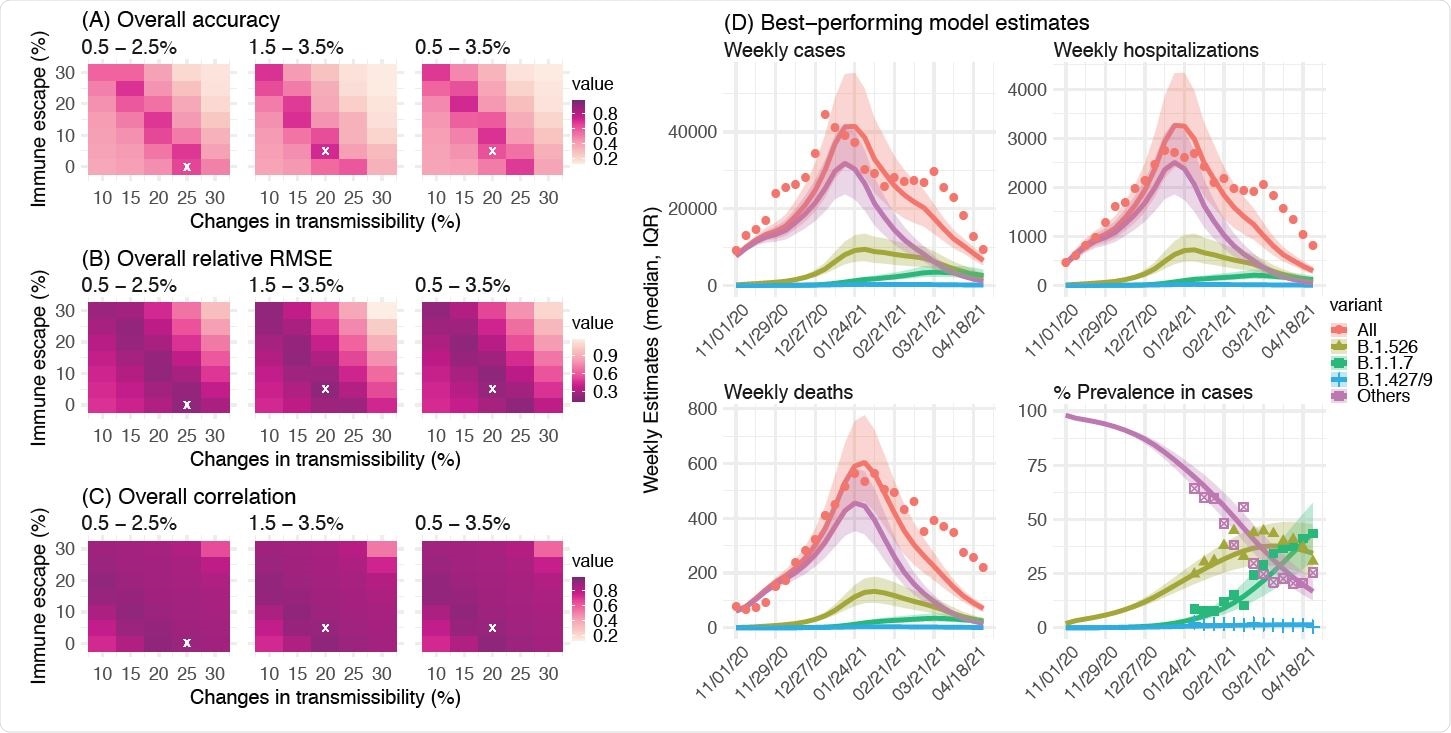 Comparison of different combinations of changes in transmissibility and immune escape property for B.1.526. Left panel shows the overall accuracy (A), relative RMSE (B), and correlation (C) of model estimates under different transmissibility and immune escape settings. White crosses (x) indicate the best-performing parameter combination. Right panel shows model estimates using the overall best-performing parameter combination (i.e., 1.5-3.5% initial prevalence, 15-25% higher transmissibility, and 0-10% immune escape). Lines and surrounding areas show model-simulated median estimates and interquartile range; dots show corresponding observations; colors indicate different variants as specified in the legend. Note that these model simulations used same infection-detection rate, hospitalization-rate and IFR (i.e., average during Nov 2020 – Apr 2021); that is, they did not account for changes in case ascertainment or disease severity by week during this period, due to, e.g., increases in disease severity by the new variants. As such, there were larger deviations from the observations during later months of the simulation with more infections by the new variants.

Scientists from the Terasaki Institute for Biomedical Innovation (TIBI) have developed a contact lens that can capture and detect exosomes, nanometer-sized vesicles found in bodily secretions which have the potential for being diagnostic cancer [...]

Among the total number of deaths caused by different types of cancer, esophageal cancer is the sixth most significant. Several conventional treatments, such as radiotherapy, chemotherapy, and surgery have multiple side effects, including off-target [...]

The TB Vaccine Mysteriously Protects Against Lots of Things. Now We Know Why

Thousands of years ago, across the Eastern Mediterranean, multiple Bronze Age civilizations took a distinct turn for the worse at around the same time. The Old Kingdom of Egypt and the Akkadian Empire both collapsed, and there was [...]

The Origins of Covid-19 Are More Complicated Than Once Thought

IN OCTOBER 2014, virologist Edward Holmes took a tour of the Huanan Seafood Wholesale Market in Wuhan, a once relatively overlooked city of about 11 million people in the central Chinese province of Hubei. The market would [...]

As demand for solar energy rises around the world, scientists are working to improve the performance of solar devices—important if the technology is to compete with traditional fuels. But researchers face theoretical limits on [...]

When shrimp shell nanoparticles were mixed into cement paste, the material became substantially stronger — researchers propose an innovation that could lead to less seafood waste and fewer carbon dioxide emissions from concrete production. [...]

Does This Video Show A Nanobot Inseminating Egg With “Lazy” Sperm?

A black-and-white video shared on social media showed a microscopic corkscrew-shaped helix as it appeared to consume a sperm, transport it, and ultimately lead the little swimmer into the wall of an [...]

Polymers containing quantum dots (QDs) are considered crucial components of next-generation consumer items, but ambiguity remains regarding how these compounds may negatively affect public health and the environment. A pre-proof paper from the Journal of Hazardous [...]

New nanocomposite copper coating could be the next superbug fighter

Vaccinating against cancer? A new class of nanoparticle vaccines developed

A vaccination as tumor therapy - with a vaccine individually created from a patient's tissue sample that " attaches" the body's own immune system to cancer cells: the basis for this long-term vision has [...]

Centaurus: what we know about the new COVID variant and why there’s no cause for alarm

A new COVID variant has recently been detected in several countries including the UK, US, India, Australia and Germany. Called BA.2.75, it’s a subvariant of omicron. You might have also heard it called “Centaurus”, the [...]