Harnessing renewable energy has been a prominent strategy to promote environmental conservation. Butterfly wings exhibit many unique properties, such as their striking wing coloration, light absorption mechanisms, and responses to various stimuli. For many years researchers have tried to replicate the intricate features of nature to develop artificial functional materials such as sensors, robotics, photovoltaics, and many more.

How have Butterfly Wings Inspired Scientists?

Butterflies are lepidopteran insects that have always intrigued researchers. Initially, scientists were more interested in the biological characteristics of a butterfly; for instance, they pointed out that chitin is the main component of butterfly wing scales. Some of the most intriguing characteristic features of these scales include interchangeable high and low refractive indices and their dimension ranges of a few hundred nanometers.

Butterfly wing comprises one bilayer scale of fused cover scales in the upper layer and small fused ground scales in the lower layer. Numerous nanostructured wing scales are arranged in an uneven, overlapping ordering, ridge ornamentation, and have periodicities between 140 and 2000 nm.

Microarchitecture of the wings revealed that each scale has a distinct shape, parallel or inclined arrangement, pigmented or unpigmented, concave or hemispherical curvature, and porous lumen. These arrangements are responsible for visible light scattering.

The micro/nanoarchitecture of the butterfly wings has inspired the development of efficient sensors and various energy applications. Energy harnessing applications predominantly rely on the wing’s nanoscale properties that involve refractive index responsiveness and light-trapping mechanisms.

At present, there is a high demand for renewable sources of energy, such as solar. Despite being renewable, solar energy has not yet gained much popularity owing to some significant constraints that include its high cost.

Once harvested, this source has to be immediately used as storing solar power requires installing large and expensive batteries. Additionally, solar energy is inconsistent and can be used only during the daytime.

One of these avenues has led scientists to take inspiration from the nanostructures of butterfly wings.

An example of the technologies associated with harvesting energy from solar light is by using Solar photovoltaic (Solar PV), which converts sunlight directly into electricity using solar PV cells. The performance of photovoltaic cells is dependent on the surface of the nanomaterial used, e.g., titanium dioxide.

Researchers have developed a second-generation solar PV cell, which is a thin-film solar cell comprised of layers of micron-think photon-absorbing materials deposited on a flexible substrate.

Although this technology is cost-effective, it is not as efficient as regular solar PV cells. A way to overcome this shortcoming has been explored by studying how a butterfly’s wings absorb sunlight.

Some of the unique properties of butterfly wings that have helped improve solar technologies are their large surface area, porous architectures, stimuli responsiveness, and light manipulation. 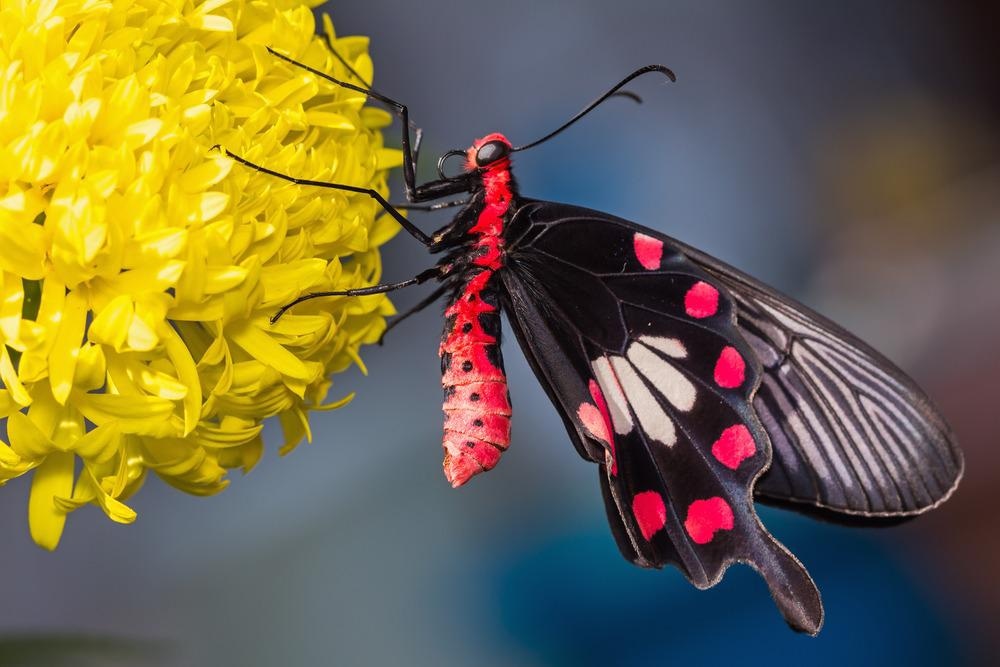 A group of researchers at the Karlsruhe Institute of Technology (KIT) have recently reported the development of solar cells based on the nanostructure of butterfly wings, which has increased the rate of light absorption by up to 200%.

The “common rose” butterfly or Pachliopta aristolochiae, is commonly found in South and Southeast Asia. This species of butterfly has predominantly black wings with some white and red spots.

The scales present on the wings not only provide protection but also absorb sunlight and turn it into heat while the scales capture the solar energy over a wide range of angles and wavelengths and maintain the body temperature.

Scientists studied the wings of this butterfly under an electron microscope and developed a three-dimensional model of the nanostructure of the wings. They found that the wings were covered with randomly spaced holes of about less than one micrometer wide, making the wings lighter and also scattering the sunlight striking them, which enables maximum absorption of sunlight throughout the day.

Using this concept, the research team developed a similar thin-film structure comprised of a layer of tiny holes on top of a silicon base. Interestingly, they found this material could roughly absorb twice as much light as other designs.

Scientists are optimistic that this design can improve the efficiency of the thin-film cells significantly and would greatly impact the solar industry.

Scientists believe that these advancements could bring about a major change in the utilization of solar energy. An increase in the use of this energy could help protect the environment from various forms of pollution and resist rapid climatic changes.

What to know about BA.2 – the newest Covid Omicron variant

It's called the "stealth" variant, but there's nothing particularly stealthy about it. Researchers are working to parse whether it is a new threat. As coronavirus case numbers in the U.S. show early signs of [...]