Importance of Synthetic Dimensions for the Construction of Topological Nanophotonics Device

Topological photonics witnessed significant advancements in the last few years. Due to topological protection, photonic devices have become more immune to scattering and robust against disorder. However, realizing topological nanophotonic devices are still considerably difficult owing to the challenges in nano-scale measurement, inherently weak magnetic response for natural materials in the near-infrared and visible range, and complexity in the fabrication process.

However, this type of device has not been thoroughly investigated in studies until now. Additionally, effective methods for the direct measurement of multi-frequency topological photonic devices at the nanoscale are yet to be identified. Thus, these challenges restricted the application and development of the topological rainbow and different topological nanophotonic devices, such as topological temporary storage and topological router. 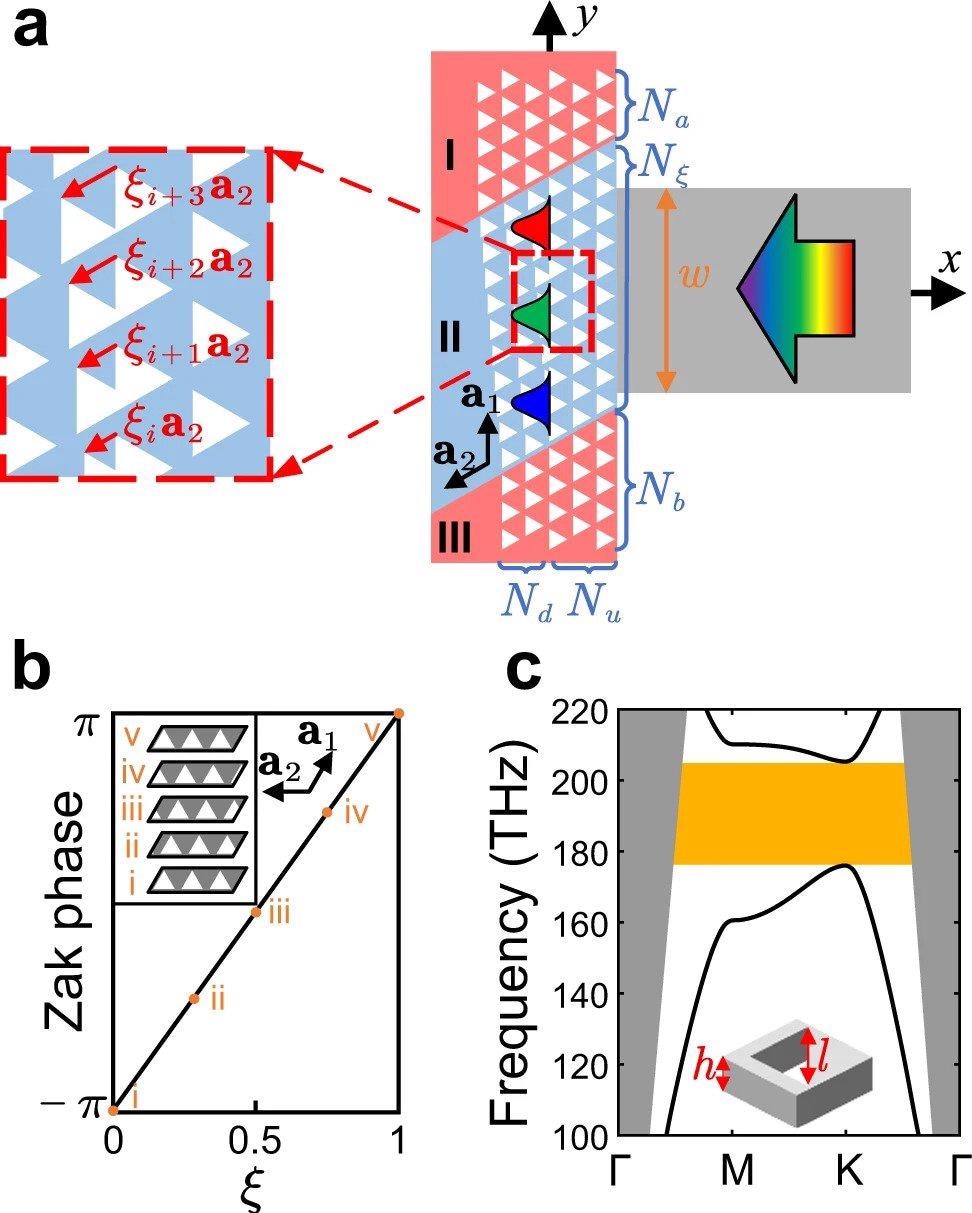 Schematic diagram of the topological rainbow configuration. a1, a2 denote the lattice vectors. The red and blue regions denote the barrier and dispersing regions, respectively. The displacement vector of ith layer is denoted by ξia2. Na, Nξ, Nb denote the number of layers of regions I, III along a1 direction, and Nu, Nd denote the number of layers of undeformed region and the deformed region in region II. Light is incident from the dielectric waveguide with a width w = 8 μm. b Evolution of Zak phases with parameter ξ. The inset shows the geometric structure for different ξs. c The TE-like bands of triangular hole structure with side length l = 0.75a and thickness h = 220 nm. The geometry of the unit cell is shown in the inset. © Lu, C., Hu, X., Wang, C. et al. (2022)

In this study, researchers fabricated an on-chip nanophotonic topological rainbow device based on translational deformation freedom as a synthetic dimension, which represents an approach that is applicable for all wavelength ranges, dimensions, materials, symmetries, and optical lattice types.

Design of the Topological Rainbow

The topological rainbow geometric structure was composed of three regions, including a dispersing region and two barrier regions. The dispersing region distributes and separates different frequencies of the topological photonic states into various positions owing to the non-trivial topology in the synthetic dimension. The barrier regions acted as a bandgap to prevent any leakage of light.

The barrier regions were composed of ordinary photonic crystals (PCs) with a full bandgap, and the lattice vectors were designated as a2 and a1. The dispersing region was fabricated by a graded translationally deformed PC on one side and an undeformed PC on the other side.

The ratio between the lattice vector and the ith layer displacement was defined as the translational parameter. A waveguide acted as the source of the external light signal, and the frequency range was located within the PC bulk bandgap.

The topological rainbow proposed in this study was experimentally verified in the optical frequency range using silicon-based technologies.

A fiber directional coupler was employed to separate the continuous-wave laser light into a reference arm and signal arm. In the Mach–Zehnder interferometer (MZI) signal arm, a lensed fiber was used to launch the light into the waveguide and collect the modulated reflection light generated by the atomic force microscope (AFM) probe. The quasi-transverse electric (TE) polarization in the guided modes in the waveguide was ensured using the three-paddle polarization controller.

In the MZI reference arm, the light was frequency shifted by 30 kilohertz using an in-line lithium niobate phase modulator equipped with a saw-tooth waveform generator. The all-fiber characteristic of the experiment led to low background noise, convenience, and compactness, which was necessary for near-field imaging of on-chip photonic circuits.

Subsequently, both the reference and the signal arm were combined and sent to an indium gallium arsenide-amplified photodetector. The photocurrent can precisely yield the phase and amplitude of the signal light through a lock-in amplifier at demodulation frequency.

The s-SNOM system possessed the capability of scanning repeatability, high optical collection efficiency, and sub-structure spatial resolution. A cantilevered AFM probe was used as a near-field probe for near-field microscopy.

The bands of the edge states and the bulk states were calculated using the finite element method, while the topological rainbow intensity distribution was determined by the finite-difference time-domain (FDTD) method. 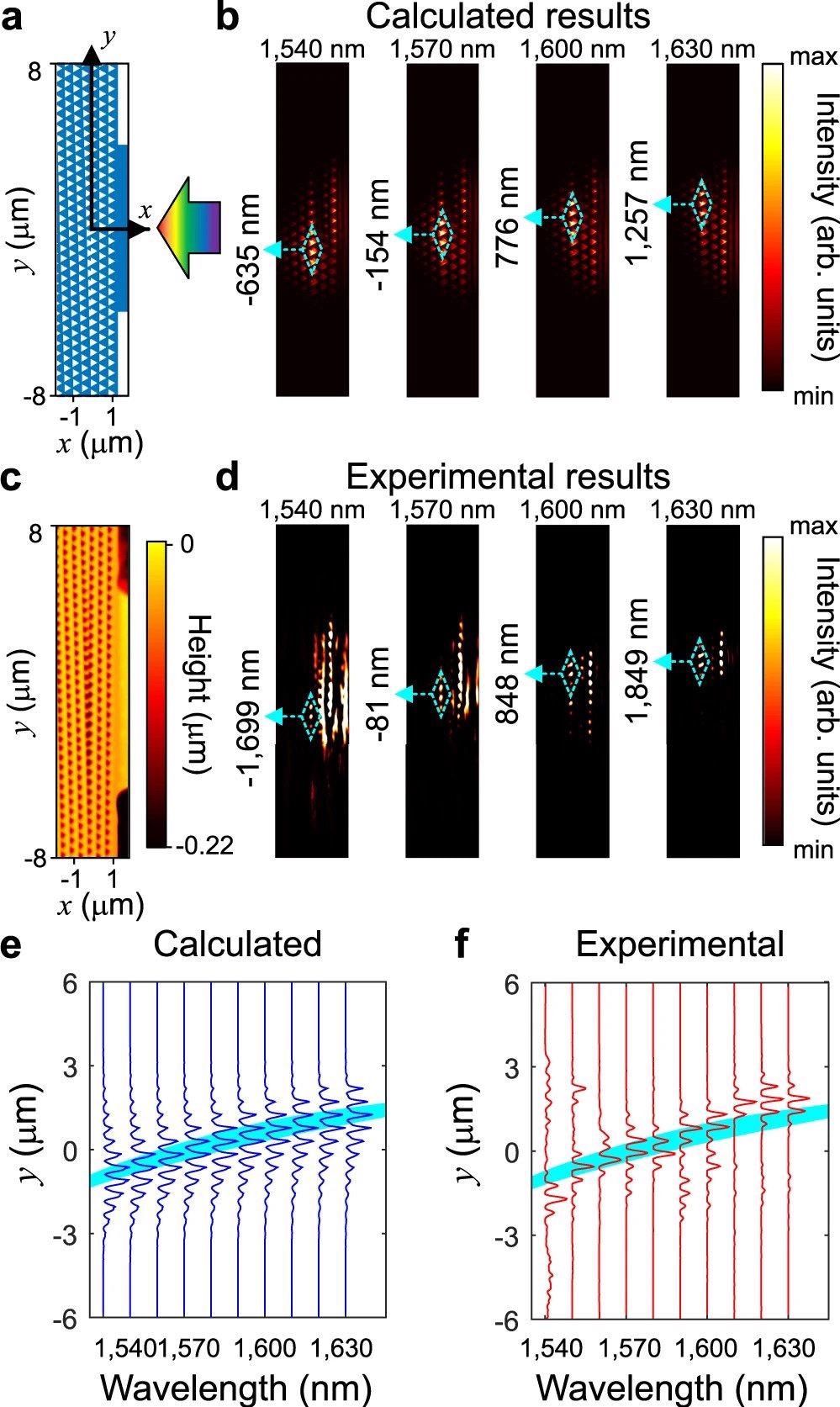 a The top view of the FDTD model, where coordinate axes are marked and light is incident from the waveguide. b The light intensity distributions (|E|2) of the calculated results for different wavelengths. c The topographic image of the sample. The color denotes the height of the surface of the sample. d The light intensity distributions of experimental results for different wavelengths. The comparison between interface intensity and projected bands for calculated (e) and experimental (f) results. In b, d, the position with maximal intensity is marked by the cyan dashed rhombuses, and the corresponding y coordinates are marked in the left. The wavelength of incident light is marked on the top of each figure. © Lu, C., Hu, X., Wang, C. et al. (2022)