Several difficulties have been associated with developing robust nanoscale coating on the surface of electrospun nanofibers. In a recent study published in Nature Communications, scientists have successfully produced a facile, controllable, and versatile method to develop superlubricated nano-skin (SLNS) on the single electrospun nanofiber in situ.

Nanofibers synthesized through electrospinning are commonly applied in several areas, including biomedical engineering, energy, and the environment. This is because electrospinning is responsible for producing highly controllable structures with specific functions.

Figure 1. The comparison of our developed surface coating strategy to construct superlubricated nano-skin on electrospun nanofibers with previously reported method. a Schematic diagram of a slightly changed procedure from previous method17,18. PLA polylactic acid, BP benzophenone, MPC 2-methacryloyloxyethyl phosphorylcholine, PMPC poly MPC, UV ultraviolet. b Schematic diagram of our optimized method of subsurface-initiated polymerization. c Representative SEM and XPS results of electrospun nanofibers for the comparison of surface morphology and elemental composition between the method in a and in b. The experiments are replicated three times independently with similar results. © Wang, Y., Xu, Y., Zhai, W. et al. (2022)

These nanofibrous membranes are also used for in vivo treatments that require direct human tissue contact. The effectiveness of the application of electrospun nanofibers depends on their surface performance. The electrospun nanofiber’s surface properties, such as patterned structure and fiber orientation, are effectively adjusted via various methods.

The incorporation of these properties improves the cell growth capacity on the fiber surface along with cellular adhesion, which plays an important role in the acceleration of the tissue regeneration process. Nevertheless, uncontrolled cell growth and adhesion to adjacent tissues lead to irretrievable consequences.

Electrospun polylactic acid (PLA)-based membranes (e.g., DK-film) are clinically used for anti-adhesion purposes. This membrane forms a barrier between the injured tissues. However, one of the disadvantages of this membrane is that it adheres to the tissue surface. Therefore, it is extremely crucial to create an electrospun membrane with superior non-adhesive surface properties to prevent post-operative adhesion. 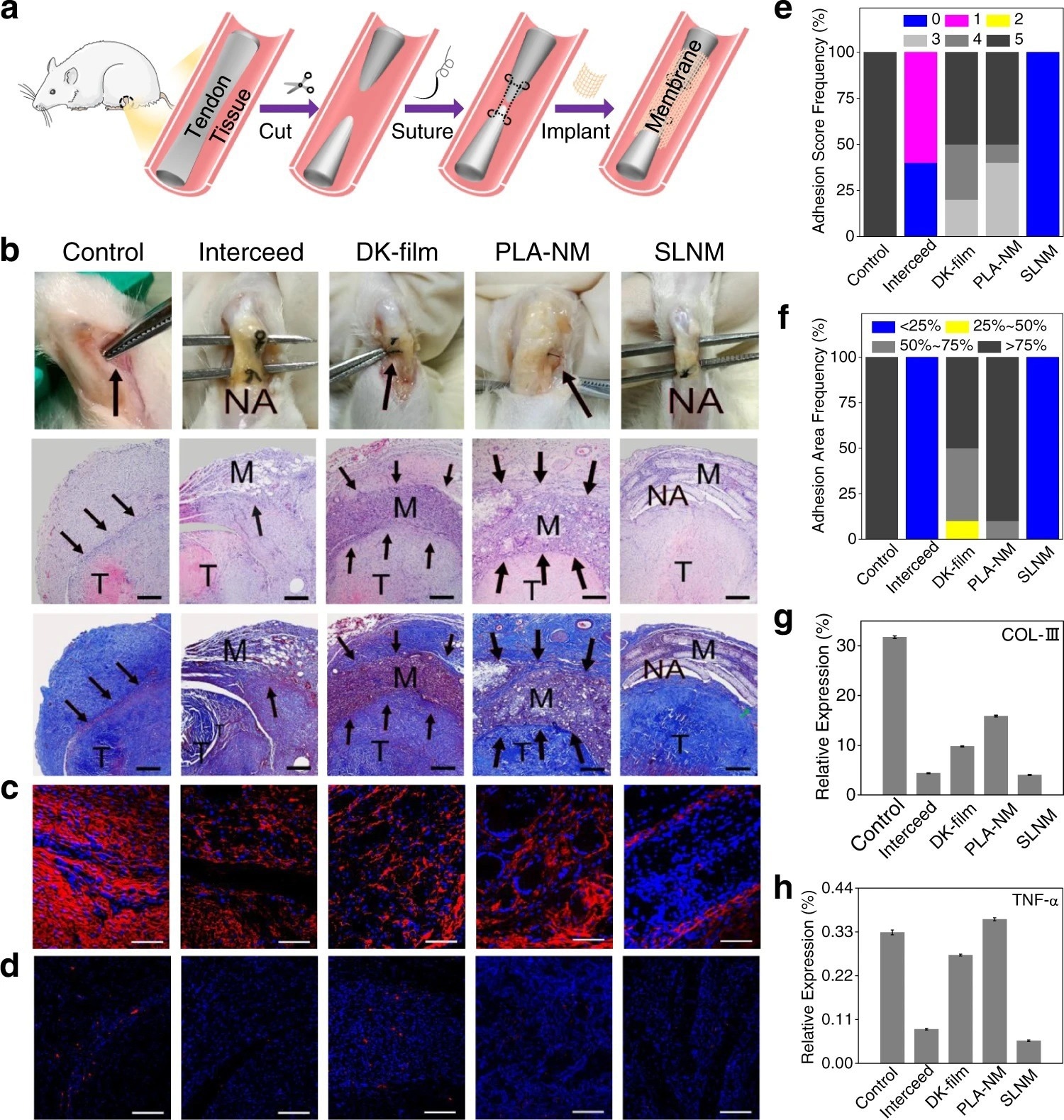 In a previous method, after soaking in benzophenone, the electrospun nanofibrous membranes were immersed in an aqueous solution of methacryloyloxyethyl phosphorylcholine (MPC) monomer, which is a hydrophilic initiator 2-hydroxy-1-[4-(2-hydroxyethoxy)phenyl]-2-methyl-1-propanone (I-2959). The next step was to expose to ultraviolet light, for 30 minutes, on each side. The membrane was rinsed with enough deionized water to remove the weakly linked PMPC molecules. The newly synthesized surface-functionalized electrospun PLA nanofibers containing PMPC on the surface exhibited hydration lubrication performance.

Recently, in situ superlubricated nano-skin (SLNS) was grown (inside-out) on an electrospun nanofiber surface. During the electrospinning process, I-2959 (hydrophilic small molecules) self-arranged in the subsurface of the PLA nanofibers (hydrophobic polymer). The main advantage of this technique is that the second initiator outside the nanofibers is not required. As stated above, photopolymerization was performed by subjecting both sides of the electrospun PLA/I-2959 nanofibrous membranes to ultraviolet rays for 30 minutes, which was then immersed in an aqueous MPC monomer solution. The electrospun nanofiber membrane was rinsed with deionized water to remove unbound MPC and, thereby, superlubricated membranes were synthesized.

The electrospun nanofiber synthesized using the first method showed the presence of a phosphorous element, which originates from PMPC. Hence, XPS data indicated that PMPC coating was successfully prepared in the first method. However, a SEM analysis showed prominent damage to nanofibers, which strongly suggests that hydrogel-skin coating cannot be applied to nanofibers. Nevertheless, SEM and XPS data of the newly developed superlubricated nano-skin (SLNS) showed successful coating without destroying nanofiber structures.

Importantly, the in situ grown superlubricated coating formed on the electrospun nanofiber surface with a thickness of around 1 to 10 nm. Additionally, the COF was lower than 0.025. The newly developed nanofibrous membranes exhibited ideal tensile property and biocompatibility. 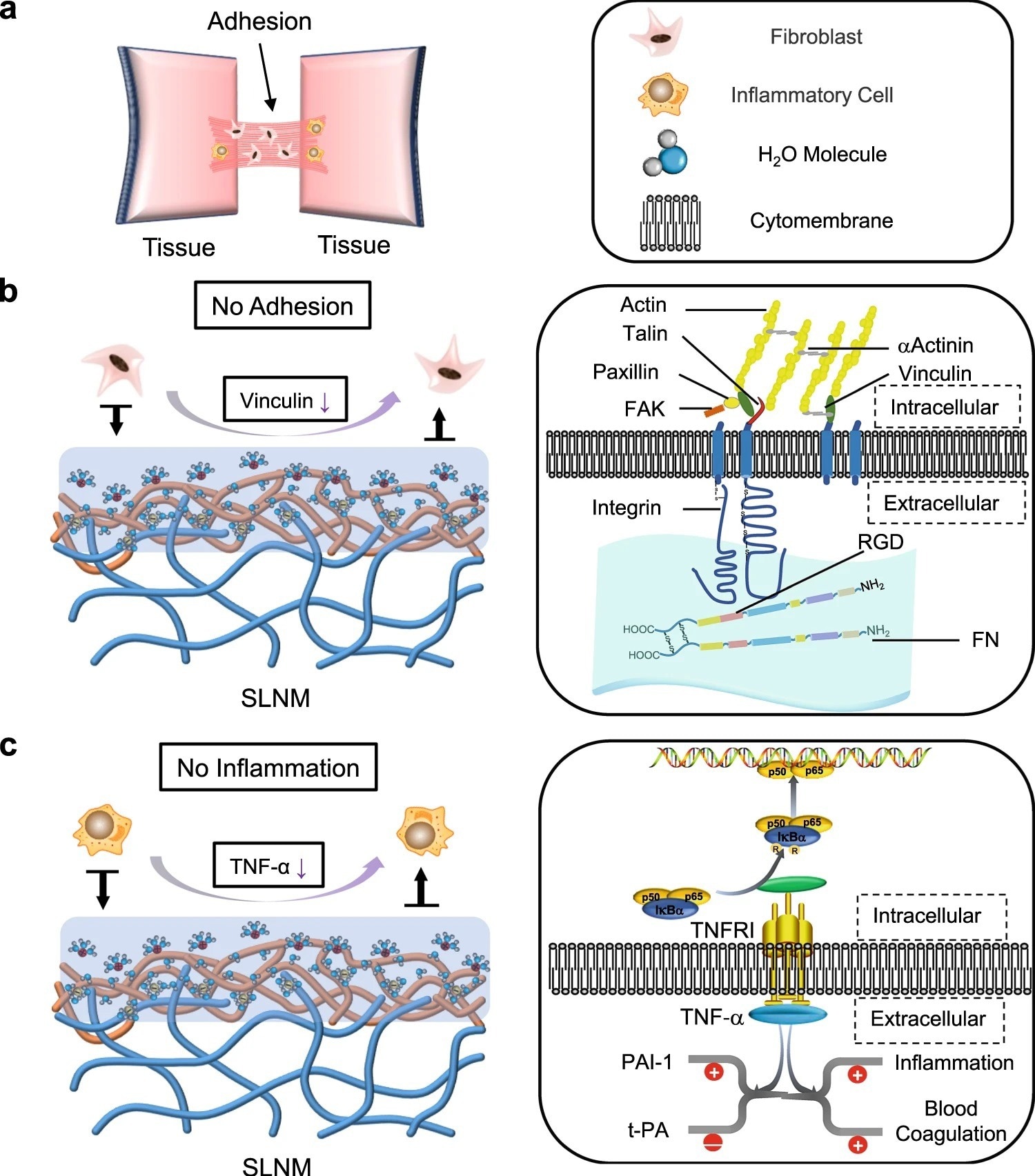