A novel freeze-dissolving approach has been devised that offers greater efficiency and sustainability compared to the classic freeze-drying process to make superfine powder or nanoparticles.​​​​​​​

In the research published in the journal ACS Sustainable Chemistry & Engineering, sphere-shaped ice particles were formed in an aqueous mixture of NH4H2PO4 or NaHCO3 to produce their respective nanoparticles.

What is the Freeze-Drying Method?

Due to their significant specific areas and strong reactivity, nanomaterials and superfine powders are gaining popularity in fields such as sustainable and environmental applications.

In the aqueous mixture, water molecules solidify quickly via the fast-freeze stage, generating a framework of crystallized ice. This step is also referred to as ice templating or freeze-casting. The crystallized ice framework forces the targeted dissolved molecules or components to produce a nanoscale scaffolding architecture, which results in substances with nanoscale or microscale pores.

The second phase is a drying procedure that uses the process of sublimation to separate water as ice templates. The ice melts throughout the drying phase, but the targeted substances, particles, or molecules stay within the ice. From inside the ice, freeze-cast NPs or porous substances with identical architecture and characteristics may be retrieved.

Due to the cooler temperatures employed in the drying phase, sublimation speeds are sluggish, and batch drying periods for common pharmacological items can take up to multiple days. The production speeds of such batch-based technologies are constrained by poor freeze-drying speeds and extended cycle operation durations.

Some drawbacks may be mitigated by purchasing a bigger freeze-dryer. Unfortunately, it takes much more time to establish perfect vacuum settings, and temperature and pressure are less consistent throughout the container, which could influence output quality. As a result of the cold temperatures and the vacuum arrangement, the drying phase consumes a lot of energy.

How is the Freeze-Dissolving Method Better?

The initial stage in freeze-dissolving is identical to that of freeze-drying, that is, freeze-casting to create ice containing the target components within and build an ice scaffold target architecture.

The ice is then dissolved at a cold temperature, such as a sub-zero temperature in an additional solvent having a low freezing point in the subsequent phase of the freeze-dissolving process. This additional solvent, like ethanol, acts as an antisolvent for the targeted components yet shows miscibility with water.

In this work, various quantities of sodium bicarbonate or ammonium dihydrogen phosphate, dissolved in water, were employed to manufacture NPs via the freeze-dissolving technique, which were then evaluated against NPs produced by freeze-drying. 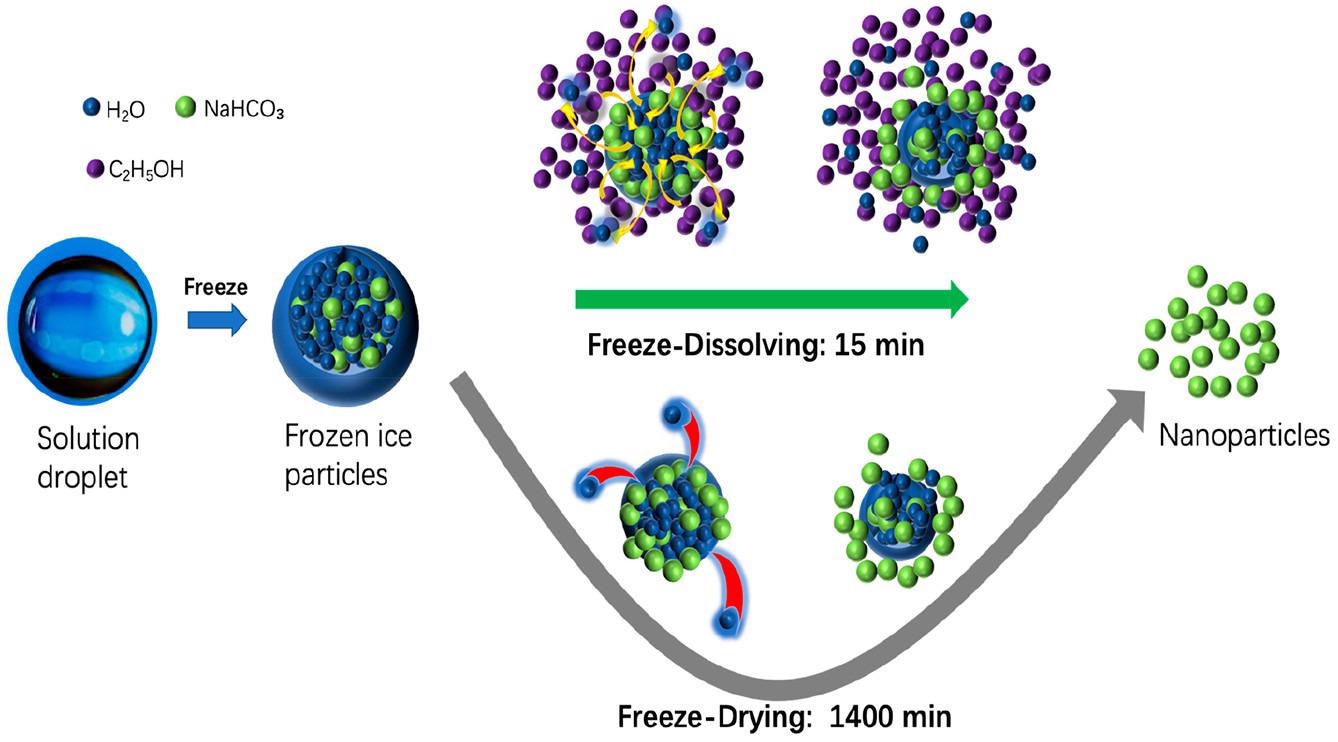 Particles of sodium bicarbonate and ammonium dihydrogen phosphate aqueous mixtures were quickly frozen to produce sphere-shaped ice particles, which were then filled with NPs and superfine powder of NaHCO3 or NH4H2PO4.

The freezing-dissolving approach reported in this study is approximately 100 times quicker and consumes roughly 100 times lesser energy as compared to the freeze-drying approach, without the need for a large facility or a vacuum. As a result, the freeze-dissolving process is likely to be used on an industrial scale with less time, energy, and footprint.

Methacrylate-based materials are often used in bone cement and dental resins. However, they have high failure rates as they undergo damage within ten years, impacting the quality of patient’s life and increasing healthcare costs. [...]

Early diagnosis of an infectious viral disease can help the patients and health care professionals monitor the outbreaks accurately and provide treatment at the early stage of a disease, avoiding any detrimental consequences. The [...]

A household microwave oven modified by a Cornell Engineering professor is helping to cook up the next generation of cellphones, computers and other electronics after the invention was shown to overcome a major challenge [...]

Nanopore sensing has emerged as a versatile approach to detecting and identifying biomolecules. Within this frame of reference, the fast-responding ionic current is considered an essential criterion for accurately measuring small objects with [...]

A plastic film that can kill viruses using room lights

Graphical abstract. Credit: Journal of Photochemistry and Photobiology B: Biology (2022). DOI: 10.1016/j.jphotobiol.2022.112551 Researchers at Queen's University Belfast have developed a plastic film that can kill viruses that land on its surface with room light. The [...]

Bone formation comes down to the nanowire

Nanotechnology that accelerates the transition of stem cells into bone could advance regenerative medicine. A nanotechnology platform developed by KAUST scientists could lead to new treatments for degenerative bone diseases. The system takes advantage [...]