Step Forward for 3D Printing at the Nanoscale

The development of a 3D nanoprinting platform that allows the printing of polymer materials with remarkable control and nanometer spatial accuracy is the subject of a new study published in the journal Nature Communications.

Three-dimensional (3D) printing is a layer-by-layer processing technique that has found applications in a variety of fields, including tissue printing, aviation, and product engineering. To make use of the benefits of 3D printing at the micro and nanoscale, numerous approaches for downscaling 3D printing have been established during the last few decades.

There has been a widespread interest in 3D printing items at the nanometer as it enables applications where specific functional features develop at the nanoscale.

Although 3D printing has modernized industrial production and development, its application to the fabrication of polymeric nanoscale materials remains a considerable issue, owing to the challenges associated with delivering the small quantities of material with high accuracy.

An effective and reliable 3D nanoprinting system must address many critical design variables, including significant spatial control over the deposition process, constant printing with few to no intermediate steps, and solvent-free material deposition to eliminate or minimize shrinking. 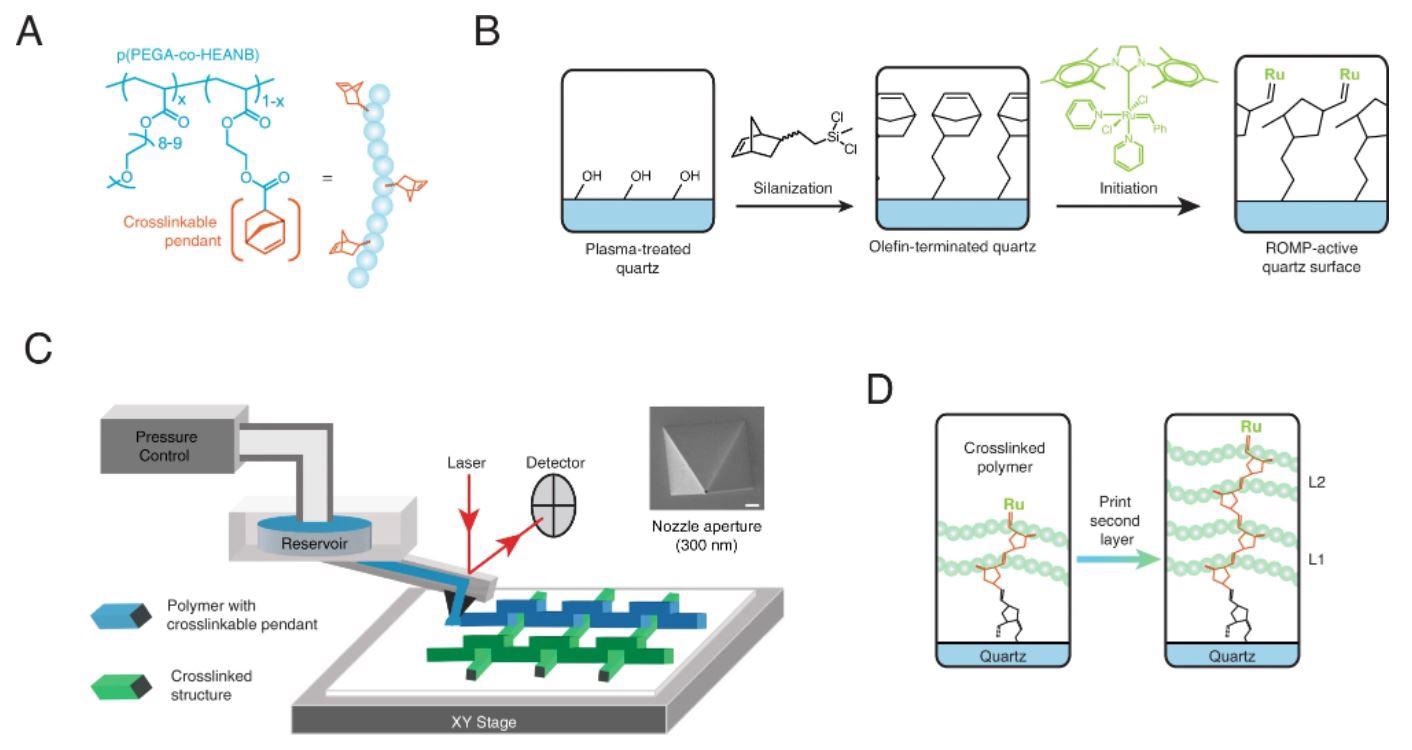 Schematic diagrams illustrating key steps in our 3D nanoprinting, including chemical crosslinking ink, surface modification and initiation, and the delivery of reactive ink to substrates to form 3D printed patterns.. A Structural formula of the crosslinking polymer, poly(polyethyleneglycol acrylate-co-hydroxyethylacrylate norbornene (p(PEGA-co-HEANB)), highlighting the crosslinkable pendant groups in orange. B Pre-functionalization of the surfaces with olefin-terminated SAM and initiated with the ROMP (ring-opening metathesis polymerization) catalyst Grubbs Generation III to enable Continuous Assembly of Polymers (CAP) upon delivery of p(PEGA-co-HEANB). C Schematic diagram illustrating the combined atomic force microscope (AFM) with microfluidic delivery, in realizing the CAP upon printing. The green material on the substrate shows crosslinked structures, while the blue is yet to be crosslinked. The inset scanning electron microscope image is of a FluidFM Nanopipette with a 300 nm aperture. Courtesy of Cytosurge AG. D Schematic of the resulting crosslinking formed after two layers of polymer have been deposited, showing the ability of the catalyst to continue crosslinking material. SEM scale bar: 2 µm. © Pattison, T. G. et al. (2022)

For nanoscale films and sheets, atomic force microscopy (AFM) is a useful characterization tool. This technology can provide high-resolution pictures and investigate local areas in both air (traditional AFM) and fluid (electrocatalytic AFM). The continuous assembly and polymerization (CAP) approach employs polymer crosslinkers with pendants, which generate highly crosslinked polymer sheets by surface-initiated polymerization (SIP) while retaining a high level of molecular flexibility due to the residual polymer side group activity.

The researchers employed a combined AFM and microfluidic device to achieve spatial precision and accuracy in distributing macro crosslinkers (or polymeric inks) to the pre-functionalized substrate. The quantity of polymer supplied was regulated by changing the distribution parameters, such as pressure, velocity, and contact duration, in the microfluidic AFM platform. The AFM enabled precise movement by planning the polymeric ink’s path with nanoscale accuracy.

In contrast to previous efforts at 3D nanoprinting, this method may be used with a wide variety of polymeric composites, demonstrating great spatial precision and design accuracy owing to the quick assembly and polymerization after the distribution of the material. Furthermore, since the curing process happens at room temperature, the curing period is reduced and the material is more stable.

Important Findings of the Study

The researchers discovered that by adjusting the manufacturing settings, the breadth and height of printed materials could be readily adjusted. As the ejection rate of the polymer was almost steady under continuous reservoir pressure, the material’s height could be raised by slowing down the printing speed.

The polymeric ink was quickly cured on contact with the surface, resulting in exceptional accuracy of the 3D pattern. Because of the living nature of the linking processes, constant printing was possible without the need for additional catalysts or treatment, resulting in continuous delivery of materials in several layers. Variable print settings and complete control of the AFM-nanofluidic system were used to achieve high spatial selection and precision.

In contrast to the optical-based 3D-printing techniques such as the two-photon laser process, this method allows for a broader range of applications because it can print multiple materials rather than just those containing photoconductive or photoactive substances. As a result, this technology can reduce the time necessary to manufacture compounds with photosensitive functional groups, thereby saving the overall time for 3D nanoprinting.

Future studies should concentrate on downsizing and production of overhanging components, which would need a quicker curing rate than the material delivery rate. This would enable the described 3D nanoprinting approach to be used in wearable electronics, optical systems, and biological sensors, among other applications.

A Brazilian study published in the journal PNAS describes some of the effects infection by SARS-CoV-2 can have on the central nervous system. A preliminary version (not yet peer-reviewed) posted in 2020 was one of the [...]

A new drug designed by scientists at Scripps Research can turn the COVID-19 virus into a harbinger of its own doom. The drug, NMT5, described in Nature Chemical Biology on September 29, 2022, coats SARS-CoV-2 with [...]

Brain stimulation paired with a nose spray comprised of nanoparticles can increase recovery after ischemic stroke in an animal model, according to scientists from Xi’an Jiaotong-Liverpool University and other universities in China. The nasal spray is [...]

The race to fight the ‘superbugs’ – the next global health threat

Increasing drug resistance could leave us powerless to fight infections we now consider routine, and scientists are urgently searching for answers. It was just a urinary tract infection (UTI). Helen Osment, a fundraiser from Hertfordshire, had [...]